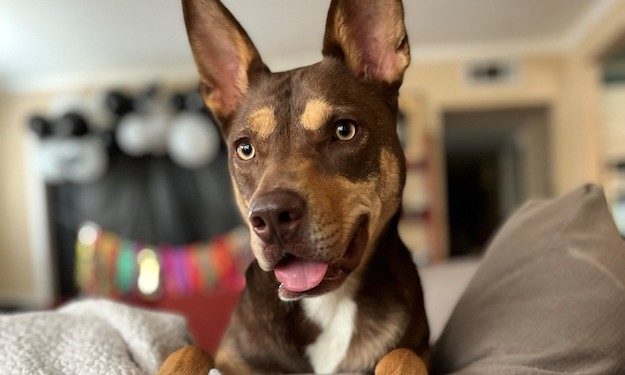 Osteosarcoma is an aggressive type of bone cancer affecting thousands of popular large breed dogs every year, including Golden Retrievers, Labs, German Shepherds, Greyhounds, Rottweilers, Boxers, and more. It is the most common primary bone tumor seen in dogs.

Whiskey is a quirky 2-year-old rescue dog (Pitbull-Husky Mix) and 100% the best dog their family ever had. Whiskey lives with her human parents, Eleni and Courtney, and their children, Stella and Jack. According to her family, Whiskey is perfect at home; easy going, smart, and only de-stuffs her own toys.

In 2021, at only 1-year-old, Whiskey began displaying signs of pain and stiffness in her back leg. After progressive limping over the next few weeks, Eleni elected to get a radiograph (x-ray). Following a tentative diagnosis of cancer, Whiskey underwent a leg amputation which confirmed Osteosarcoma.

Given only 6-9 months to live, Whiskey received 5 rounds of chemotherapy and did fantastic. Her chest x-rays were clear, and she never appeared to be sick. Eleni and Courtney were thankful that Whiskey was feeling well. This didn’t slow Whiskey down, a family friend commented “Does she know she only has 3 legs? She acts like she has 7.”

In April 2022, a month after finishing treatment, the Veterinary Oncologist found a tumor in Whiskey’s chest. The doctor was concerned about how quickly it appeared, which was devastating news for Eleni and her family. They were confronted with what to do next. They could either bring Whiskey home and enjoy the 1-3 months they would have left with her, or, if they decided to move forward with more chemo, it may not prolong her life and may make her feel sick. Searching for options, Eleni joined an Osteosarcoma support group on Facebook, keeping an eye out for clinical trials. However, Whiskey was disqualified from the many options they found due to her lung metastases (cancer that has spread from the original tumor to the lung.)

Then they found the Ethos Discovery website and the MIMIC study!

This one-and-done surgery would not involve the potential side effects of some of pharmaceutical-based options. The only drawback was this trial is currently only available in San Diego, and Whiskey’s family is based in Texas. Eleni called Dr. Chris Thomson, the Veterinary Surgical Oncologist conducting this study, 7 times in 4 days with different questions. She said, “Dr. Thomson was great answering all our calls and questions every time.” Dr. Thomson reviewed Whiskey’s x-rays, which included 3 more lung metastases and shared that Whiskey qualifies as a trial candidate!

Whiskey and a few of her family members headed off on an early July road trip from Texas to San Diego to participate in MIMIC. Once in San Diego, there was another cause for worry. Whiskey’s new CT scan  (computed tomography) identified something that looked like it may be significant cancer progression, in which case they could not move forward with the surgery. Eleni and Stella hopes were dashed, and they waited anxiously to hear more. After further review with the Radiology team, Dr. Thomson mentioned that Whiskey likely had scarring of the lungs from a previous heartworm infection but surgery could still be considered.

Whiskey’s surgery happened on Thursday, two days after their arrival in San Diego. Everyone was impressed by how well Whiskey handled the surgery. She was back with Eleni and Stella in less than 24 hours, much less than the original 48 hours that was expected. After surgery, Whiskey was excited and active, no matter how much they tried to keep her still. The incisions were very small and the only complication in the weeks ahead was that one of the sutures split while Whiskey was jumping, but this was quickly fixed by their local veterinarian. Whiskey continues to do well! She still believes she has an endless supply of toys, continues to be active and feeling good. Whiskey’s family did not expect she would make it to her 2nd birthday, but she recently just turned 2 in October! Her pathology report indicates Whiskey may still have microscopic cancer, so Whiskey’s family will continue to monitor for any unusual behaviors.

They entered the MIMIC trial for Whiskey, to make her time mean something more. By participating in this trial, Whiskey can do so much more for others. It gave her more time with her family and the information from her case will help many more dogs live a better and longer life.

We’re asking you to join us in the fight against cancers. Please consider donating to Ethos Discovery – 100% of your gift supports medical research! Donate or learn more here.

Port City Veterinary Referral Hospital opened its doors in 2008 with 15,000sqft of space and 11 exam rooms. At the time, the hospital felt enormous with plenty of room for growth. Now, in 2022, we are caring for 76% more pets than we were in just 2019. This has put a strain on our capacity to invite all of our clients into our hospital.

To meet the needs of the community, and serve as many pets as we can, we will be keeping curbside care in place while we lease and renovate a new, larger building nearby. We’re looking forward to a bright future in a bigger hospital where we can care for all your clever, cute, sneaky, wonderous pets. We ask you to understand and forgive us a little as we navigate the next phase in our evolution.